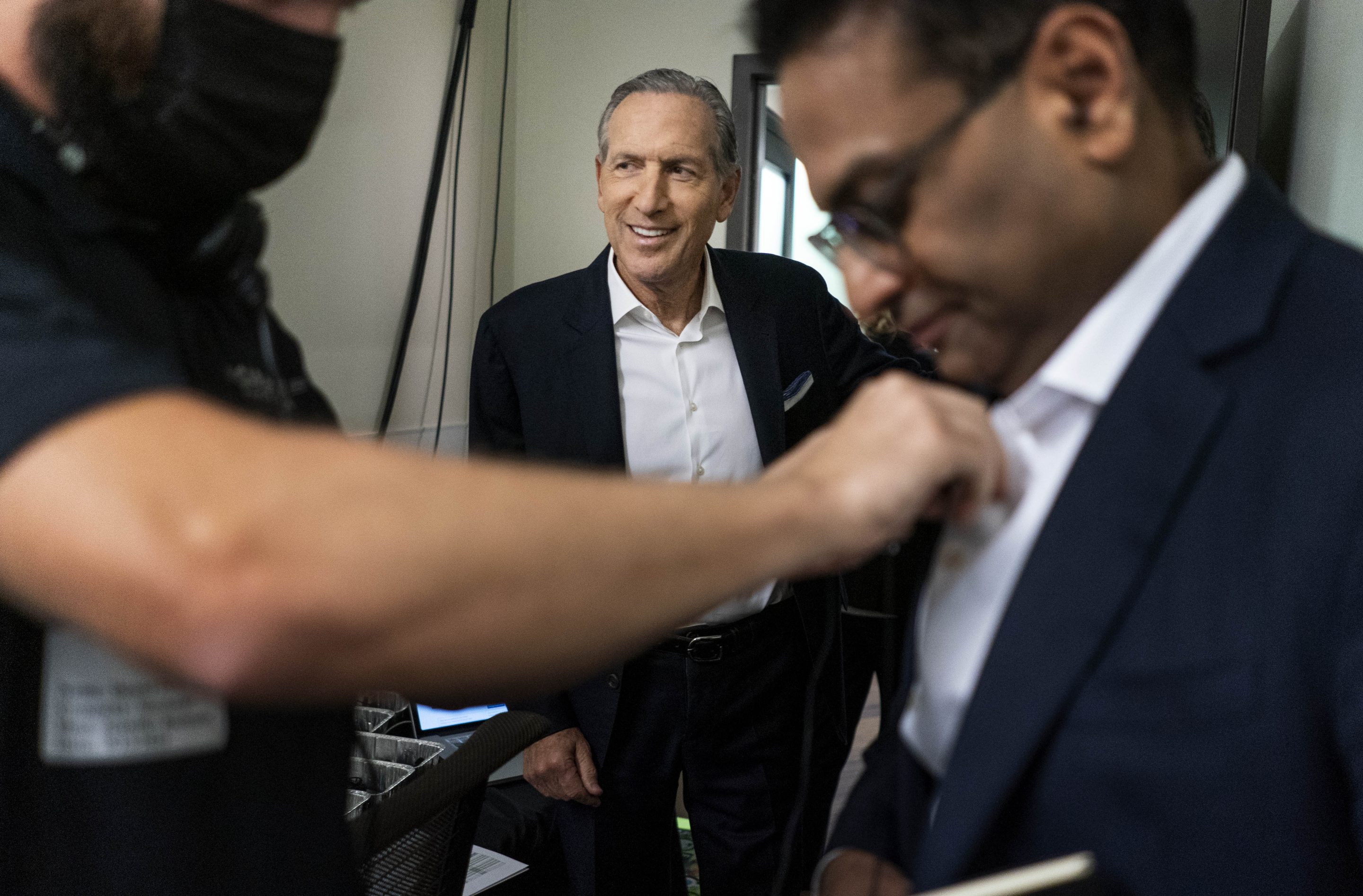 Another month, another announcement of an Indian taking over a large corporation or university.

Next year, Laxman Narasimhan will take over from Howard Schultz as the CEO of Starbucks. In November, Sunil Kumar was appointed as the first person of color to become president of Tufts University. In October, Naureen Hassan took over as President of UBS Americas. Earlier in July, Sowmyanarayan Sampath took over as the CEO of Verizon Business and Jayathi Murthy became the President of Oregon State University–the first woman of color to take this position.

The success of Indian-origin leaders in Silicon Valley is well-documented by the likes of Vivek Wadhwa and Annalee Saxenian. However, this extraordinary success has now spread from Wall Street to the White House–and everything in between.

Companies currently led or owned by Indians have a market capitalization of more than $6 trillion, just over 10% of the total market cap of all companies listed on the NASDAQ. Some notable heavy hitters include Adobe, Alphabet, Microsoft, IBM, Novartis, and soon Starbucks. (So long, Twitter.)

This does not include companies such as Gap, Harman International, Mastercard, Match Group, and PepsiCo, where an Indian recently stepped down after a long stint as the CEO. For perspective, that’s another $700 billion in market cap between these five. It wouldn’t be incorrect to say these leading companies had their best run in recent history under these leaders.

Indians in the U.S. have come a long way, surviving exclusionary and xenophobic waves such as the California Alien Land Law of 1913, the Asian Barred Act of 1917, the Johnson-Reed Act of 1924, and countless racial slurs to dominate the healthcare, hospitality, and technology industries.

Indians were deported and barred from entering Canada and the U.S. for decades. The Immigration and Nationality Act of 1965 re-opened the doors for Indians to immigrate to the U.S. From Indian startup founders not getting funding in the 90s and 2000s, to startups not getting funded unless they had an Indian co-founder–the dramatic change was swift. Today, it’s “normal” to see yet another public company appointing an Indian executive (or more) in leadership positions, or to see an Indian led-startup raise at a multi-billion dollar valuation. Look at Jyoti Bansal (Harness, $4 billion), Naval Ravikant (AngelList, $4 billion), or Payal Kadakia (ClassPass, $1 billion).

Indians are now the second-largest immigrant group in the U.S. An oft-quoted fact, the household income for Indians is twice that of the national average–an important measure of success in a capitalist economy. These achievements are significant because 75% of the 4.6 million Indians in the U.S. are foreign-born. Of the 3 million foreign-born people who identify as Indians, 29% have been in the country for less than five years–and 51% are non-U.S. citizens.

The effect of tech layoffs on Indian immigrants

Why do these data points matter? Your pursuit of happiness is jarred when your security needs are unmet. For example, recent tech layoffs could mean you packing up and heading back to your “home” country.

In addition to other issues common to immigrants, such as having no credit history, facing cultural and language barriers, and a lack of familial support, Indians also face extreme immigration delays. On average, an Indian-born immigrant has waited 13 years to get their green card, significantly higher than other immigrants. The situation has consistently worsened over the years. New estimates peg the number as high as 150 years! This is not an exaggeration, just facts based on data from the U.S. Citizenship and Immigration Services (USCIS).

The recent wave of tech layoffs has particularly impacted immigrants on H1-B work visas. In November alone, more than 42,000 tech employees lost their jobs. An estimated 30% of those laid off are work visa holders. Those on an H1-B have to remain employed by a company that can sponsor their visa or leave the country within a 60-day grace period. Each year, Indians are issued a majority of the 85,000 H1-B visas. A majority of the 75% of foreign-born Indians come in as students and stay on an H1-B visa.

The layoffs will have an outsized impact on the community. Finding another job in this market will be difficult if not impossible. Traditional H1-B employers such as Amazon, Meta, and Microsoft are on hiring freezes. Venture money for the kind of startups that could absorb part of this talent has dried off. The holiday season is a generally slow period for hiring. The U.S. has seen a similar exodus of immigrants in the past–during the 2000 bust and the 2010 recession.

Why are Indians taking over?

I have been curious about this topic for a long time. My doctoral thesis on Indian immigrant entrepreneurs and data from other studies show that education and family are the key drivers behind the success story of Indians in the U.S. and elsewhere.

Some 82% of Indians between the ages of 25-55 in the U.S. are college-educated, compared to 42% of white people. Some 94% percent of first-generation Indians are stably married, compared to 66% of white Americans. The percentage for U.S.-born Indians drops slightly to 87%, though still much higher than the average for other groups. The annual median household income of an Indian household is $141,000. For male-only households, it is a little higher at $148,000. For female-only households, the median drops significantly to $72,000. Shouldn’t the male-only and female-only households get together and bring home $220,000? My math teacher would approve!

A significant percentage of physicians in the U.S. are of Indian descent. However, lifestyle diseases for people of Indian origin, especially males, have been an ongoing concern. Data shows a significantly higher percentage of Indian-descent males suffer from lifestyle-related conditions in every age group, except 65 and above. Census data also says about 5% of Indians don’t have health insurance. Severe poverty and homelessness are a concern in the U.S.-based Indian community, even though the numbers are relatively low.

While Indians have evidently done well in the healthcare, hospitality, and technology industries, they remain underrepresented in several other sectors of the economy such as banking and finance, education, media, sports, and policy-making. Given some heavy hitters in the White House, such as Vice President Kamala Harris, one could argue whether we are genuinely “underrepresented” in politics. Yes, we are.

Despite the racism, xenophobia, and other “usual minority problems,” this one percent of the U.S. population has made an outsized impact and punched well above its weight. We acknowledge and recognize the pioneers and mavericks who set the tone for other Indians. The bamboo ceiling, or whatever is left of it, has been blown up for good.

U.S.-born, second-generation Indians are expanding and venturing out at an even faster clip. Mindy Kaling, the child of an architect and a doctor, ventured out into Hollywood and is one of the most prominent names in the industry. She is associated with major productions such as A Wrinkle in Time, Never Have I Ever, Ocean’s 8, The Mindy Project, and The Office.

Rajesh and Rupesh Shah, both graduated from the Wharton School of Business and have grown their parents’ tile and flooring business exponentially. Manu Shah told me how, along with his wife Rika, they started MSI in their Fort Wayne, IN basement in 1975. Today, MSI is North America’s largest premium surfaces supplier. As the largest importer of ceramic, granite, marble, and other materials from 36 countries, MSI employs more than 2,500 workers in the U.S. and has annual revenues of over $2.5 billion.

Anand Gala told me the story of how he started working with his parents at their Jack in the Box franchise when he was nine years old, standing on milk crates to reach the point of sale systems. Anand is now the co-founder and Managing Partner of Gala Capital Partners, LLC, a diversified investment and holding company with interests in coffee, chain restaurants, franchising, software and technology, real estate development, and public equities investment. Gala owns and operates more than 500 locations across the U.S.

Tushar Patel told me how he grew his parents’ humble budget motel business into a multi-billion dollar investment conglomerate. The Tarsadia group has transacted over $1 billion of hotel assets over the years and has more than $2 billion in assets under management (AUM). Their portfolio companies range across biosciences, education, hospitality, pharma, and tech.

As the second and third generations of Indians come of age, the unprecedented Indian takeover is here to stay.